One of his stipulations was that all of the support for the work of the mission should come through trusting in God rather than appeals for money.

When Taylor spoke at a gathering, he made it very clear that there was to be no appeal for funds. He depended on people who felt they were called to donate their support, rather than being asked.

Taylor's work grew to include over 100 missionaries, as well as schools and hospitals.

Often, he had no funds to pay for food or clothes or passage for new missionaries sailing to China, yet he was always at peace, believing that he had a heavenly Father who would provide.

Many people were astonished at his serenity. What a level of faith !

Such faith doesn't just appear; it is developed through years of trusting in God in tough times.

As a young man Taylor tried to see how frugally he could live, giving away most of his money to help others and existing on a very sparse diet. His faith grew through the time spent in prayer.

We would all like a deeper faith, yet we don't always like the process of acquiring it, for it means trusting in God in often extreme circumstances.

Faith isn't a feeling, it's a certainty. Its about the trustworthiness of God.

So, how do we react when we are going through difficult circumstances or seasons? Firstly, we don't deny our feelings. Any crying out in the Psalms is frequently followed by an exhortation to remember all that God has done and to praise Him for it.

Faith means standing behind what is true, instead of depending upon our feelings.

I stand by my faith, but I still battle hard not to be overwhelmed by circumstances. Although I've been a Christian for over 40 years, I'm still learning.

We grow in faith as we are asked to exercise it. Part of that is reading about people who lived by faith and being encouraged by their witness.

So, if you have a chance, pick up a book on one of the great missionaries and learn about how very faithful God is.

Müller is known as a prayer warrior who started orphanages and preached heavily about the need for missionaries around the world. In his lifetime his orphanage in England took care of more than 10,000 children.

He was instrumental in promoting the idea of “faith missions.” This is where missionaries are not supported by a denomination but by individuals and churches.

He believed in never asking anyone for support, but trusting God to lay it on the person’s heart to support the need.

We are surrounded by so great a cloud of witnesses who, by faith, have testified to the truth of God's faithfulness. 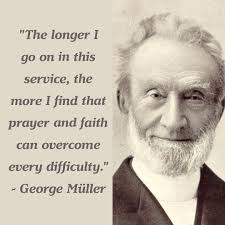 The Church should be a healthy, fruitful vineyard that will bring honor to Christ, a Church after Christ's own heart where He can look at the travail of His soul and be satisfied. Among the people should be a beautiful simplicity and a radiant Christian love so it would be impossible to find gossips and talebearers. There should be a feeling of humble reverence and an air of joyous informality, where each one esteems others better than himself or herself, where everyone is willing to serve but no one jockeys to serve.

Childlike candor Church, and the presence of Christ should be felt and the fragrance of His garments smelled by His beloved. Prayers should be answered so regularly that we think nothing of it. It would be common because God is God, and we are His people. When necessary, miracles would not be uncommon.

Now I am going to describe Churches as they are, with beau­tiful exceptions, of course. There are pure saints in almost all the Churches, a few here and there, but the prevailing religious mood is self-centered instead of world-centered. Instead of being out­going and soul-winning, the average Church is self-centered and self-satisfied. We make our reports and we spend pages telling what wonderful good boys and nice girls we have been. Self-satisfaction seems to be upon us all.

Worldliness of spirit is the prevailing mood in the average church, along with carnality of heart. To the Corinthians, Paul said in effect, "You are carnal and I cannot speak to you of spiri­tual matters. I would like to come to preach deep things to you, but you are too carnal."

Another prevailing mood of the average Church is to be Chris­tian in name but in practice to be unchristian. Our trouble is not that we refuse to believe right doctrine, but we refuse to practice it. We have the peculiar contradiction of believing the right thing and living the wrong way, a strange anomaly within the Church everywhere.

In the Church many are lovers of pleasure more than lovers of God. If you do not like what I am saying, I want to ask you something. Think about the company you run with. What do they talk about most? God and the love of God, or other things? You decide that.   ‘Culture,’ A.W. Tozer

Evangelism is " A Christian being a Christian "  J.Packer.